The U.S. has agreed to settle a dispute with a former Illinois resident who now lives in China over his alleged failure to report foreign bank accounts in Beijing and Hong Kong, the government told an Illinois federal court in U.S. v. Changlin Wu, case number 1:20-cv-04519, in the U.S. District Court for the Northern District of Illinois.

Changlin Wu has agreed to settle more than $813,000 in penalties, interest and fines for willful failure to file report of foreign bank and financial account forms for 2011 through 2013, according to the filing by the government.

According to the government, Changlin Wu owes the penalties for failing to follow Report of Foreign Bank and Financial Account requirements for 2011 through 2013. Wu had interests in bank accounts in Beijing and Hong Kong that he failed to timely report.

Wu started a company called Longwoods Resources LLC, referred to as Longwoods US in the complaint, in 2007 and filed federal income tax returns for the three tax years in question. His self-prepared tax returns weren't timely filed, and he also didn't file a Schedule B, listing interest and ordinary dividends, with these tax returns even though he owned bank accounts that earned interest, the government said.

In October 2014, Wu told the Internal Revenue Service in an interview that he had one foreign bank account with the Bank of China in the name of a company called Longwoods Science & Technology Development Inc., referred to in the complaint as Longwoods China, with an account balance under $10,000. He later gave the IRS bank statements from that account showing a balance of approximately $48,000 in May 2012, the complaint said.

Wu gave conflicting statements about his ownership interests in Longwoods China, initially claiming he owned 19% but later stating he owned 100%, the government said. In addition, he informed the IRS in April 2015 that he held no personal bank accounts in China during 2011 through 2013, according to the complaint.

The government said Wu had an interest in a foreign bank, securities or other financial account during each of the years at issue in which the aggregate balance, at some point during each year, exceeded $10,000. He failed to submit FBARs on time for the three years in question, and the FBARs he eventually submitted didn't disclose all the accounts in which he had an interest during those years or the correct highest balance amounts, the government said.

Wu's failure to submit the FBARs timely and accurately in each instance was willful, the U.S. government asserted.

If unspecified conditions aren't met by July 2, 2022, Wu agreed to file for a consent judgment, the government said, asking the court to hold the case until then.
Have an FBAR Penalty Problem? 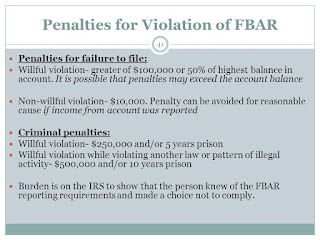