IRS Certification of Seriously Delinquent Tax is Not Unconstitutional

IRS Certification of Seriously Delinquent Tax is Not Unconstitutional 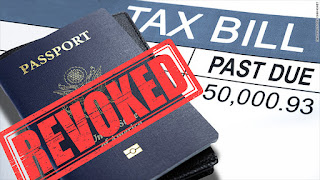 The Tax Court has determined in Rowan, (2021) 156 TC No. 8, that the IRS properly certified to the Treasury Secretary that a taxpayer’s tax debt was “seriously delinquent.” The Tax Court found that Code Sec. 7345 does not run afoul of the Fifth Amendment Due Process Clause or the Universal Declaration of Human Rights because it merely provides for the certification of certain tax-related facts; it does not restrict in any manner the right to international travel.

IRC Sec. 7345 authorizes the IRS to send to the Treasury Secretary a certification that an individual has a “seriously delinquent tax debt.” With certain exceptions, a “seriously delinquent tax debt” is an individual’s unpaid, legally enforceable federal tax liability, which has been assessed and which is greater than $50,000 (adjusted for inflation) and with respect to which the IRS has filed a Notice of Lien (for which the collection appeals rights have been exhausted or lapsed) or issued a Levy. (IRC Sec. 7345(b)).

For more than two decades, Dr. Robert Rowan (“Rowan”) failed to pay his federal taxes. Rowan, a U.S. citizen, is a medical doctor licensed to practice in California. He frequently travels to developing countries to offer medical services free of charge to populations that would not otherwise have access to adequate medical care. He also has family members in Singapore and mainland China, where he travels for personal reasons.

Rowan held a valid passport when the certification was made, and as of August 2020, the SOS had not taken any action to revoke Rowan’s passport.

When Rowan received notice of the certification, he petitioned the Tax Court to determine that the IRS’s certification of his tax debt as "seriously delinquent" was invalid.

The IRS responded that it did not err in certifying Rowan’s tax liabilities as seriously delinquent tax debt because: (1) IRC Sec. 7345 is constitutional; (2) UDHR can't be used to invalidate IRC Sec. 7345; and (3) his tax debts are enforceable.

In This First Case To Consider The Merits of a IRC Sec. 7345 Certification, The Tax Court Agreed With The IRS
That It Did Not Err In Certifying Rowan’s Tax Liabilities
As Seriously Delinquent Tax Debt.

The Tax Court rejected as meritless Rowan’s claims that Code Sec. 7345 is unconstitutional because it infringes on his right to international travel.

The Court held that a plain reading of the text of IRC 7345 shows that it doesn’t impose any restriction on international travel, but merely provides a way for the IRS to certify the existence of a seriously delinquent tax debt and for the Treasury Secretary to transmit that certification to the SOS. All passport-related decisions are left to the SOS and the SOS’s authority to revoke a passport doesn’t derive from IRC Sec. 7345, so IRC Sec. 7345 doesn't restrict the right to international travel.

Similarly, the Court summarily rejected Rowan’s arguments regarding the UDHR. Because IRC Sec. 7345 does not impose a limit on the right to travel, the UDHR's protection of the right to travel as a "human right" cannot provide any ground for invalidating the IRS’s certification of Rowan's tax debt as seriously delinquent under IRC Sec. 7345.

Finally, the Court found that the IRS produced Form 4340, Certificate of Assessments, Payments, and Other Specified Matters, for Rowen’s tax years at issue. These and other documentation in the record showed that the period of limitations on collection remained open for all relevant years. Therefore, Rowan's tax debts were enforceable.

The Court noted that the constitutionality of the authority granted to the SOS by FAST Act section 32101(e) was not an issue in the case and, therefore, the Court expressed no view on that issue.