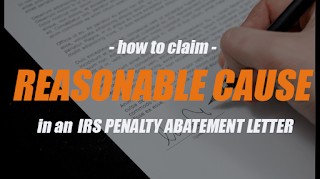 In some cases, to take advantage of the reasonable cause defense, the taxpayer must also show that they acted in good faith or that their failure to comply was not due to willful neglect.

According to the Practice Unit, an auditor should determine whether the taxpayer acted with reasonable cause on a case-by-case basis. The most significant of the facts and circumstances the auditor must consider is the taxpayer’s effort to report their proper tax liability.

Other factors for an auditor to consider are the taxpayer’s experience, knowledge, education, and whether the taxpayer relied on the advice of a tax advisor.

When the auditor considers a taxpayer’s reliance on the advice of a tax advisor, the auditor should consider whether:

Generally, A Taxpayer Does Not Have Reasonable Cause
If The Penalty Relates To The Late Filing Of A Tax Return
Or Payment Of A Tax Obligation.

The taxpayer is responsible for timely filing and payment, and this responsibility cannot be delegated. However, an auditor should consider factors that might excuse late filing or late payment such as whether the taxpayer's records were unavailable (for example, due to disaster or casualty) or whether there was a law change of which the taxpayer could not reasonably have been expected to be aware.

In addition, a taxpayer's forgetfulness is not generally a basis for reasonable cause; however, it could be if there is a medical reason for such forgetfulness (e.g., the taxpayer has dementia).