According to the Miami Hearld Magic Johnson is one of a cavalcade of rich and famous, including golfer Tiger Woods, actors Angelina Jolie and Brad Pitt, soccer star Cristiano Ronaldo, among them, listed as the owners of registered businesses in the Grand Duchy of Luxembourg.

There is nothing illegal about owning Luxembourg Companies and there are legitimate reasons for a company to hide the identify of its owners. But the benefits, as well as the secrecy, are being stripped away. Up until recently, it was a way to minimize taxes and maintain a high level of confidentiality.

Now, thanks to a law that took effect in 2019 requiring Luxembourg companies to list their beneficial owners, those who have an actual financial stake in the company, are now public.

The double whammy of the new transparency law and the 2020 expiration of the special tax perks documented in the 2014 Luxembourg Leaks investigation, appear to have made a dent on the country’s popularity as a destination for global wealth: 2020 was the first year in the registry’s history that more existing companies left Luxembourg than new companies entered. 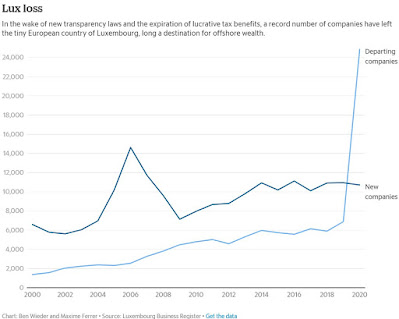 When those companies leave, the names of their beneficial owners leave the registry, as well. Take golf legend Tiger Woods. He was listed as the beneficial owner of a company called Parkridge Holdings, which was registered in Luxembourg on Christmas Eve in 2019 after previously being registered in the Netherlands for more than a decade.

The company filed one annual report showing that it held more than $218 million in assets at the end of 2019, more than half of which were shares in a company called Oakland Securities Limited, though the report doesn’t indicate where Oakland Securities is located. One month after filing the annual report in October 2020, the company was dissolved and reincorporated elsewhere.
The same thing occurred with a company beneficially owned by soccer great Cristiano Ronaldo. His CRS Holding was deleted from the registry in May 2020 and, with it, so went the record of his beneficial ownership.
“It’s an enormous loophole if information can disappear from one day to another,” Townsend said. “From an investigative perspective, historical records are critical in the chain of evidence. What we have seen in the Panama Papers is that corrupt actors change ownership fairly regularly, to avoid a person being traced.”

The Miami Herald and its parent McClatchy partnered with 17 media outlets, including Le Monde in France, Süddeutsche Zeitung in Germany and the Organized Crime and Corruption Reporting Project, as well as the nonpartisan Anti-Corruption Data Collective to analyze Luxembourg’s corporate registry, which contains more than 140,000 active companies, as part of a project called

OpenLux.
The registry cannot be searched by owner name, but is instead only searchable by company name, making it impossible to discover whether someone is a beneficial owner of a company in Luxembourg without knowing the name of the company in the first place. Le Monde scraped the data from the registry and shared it with partners last year.
Many secrets still remain in Luxembourg. The OpenLux investigation found that thanks to loopholes and special exemptions, just under half of all the companies in Luxembourg’s business registry, especially investment funds, list no owner at all. That’s because the registry requires only the disclosure of beneficial owners holding a stake greater than 25%, which is a threshold few investors reach.
Need International Tax Advice?