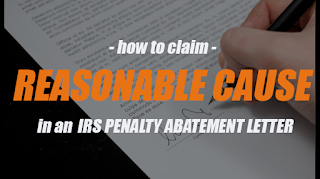 Procedurally Taxing had a good analysis of a recent district court opinion which addresses the inability to establish reasonable cause for a late filing penalty even if a longtime preparer promised but failed to e-file an extension of time to file a 1040.

In 2017, taxpayers Erik and Aspasia Oosterwijk sold for many millions of dollars a Baltimore based wholesale meat business that they had run for decades. When it came time to file their 2017 tax return on Tuesday April 17, 2018 (Monday April 16, 2018 was Emancipation Day in DC), the taxpayers expected their longtime preparer to e-file an extension and instruct IRS to apply a payment of about $1.8 million in taxes.  The taxpayers made sure they transferred money to their checking account, and kept looking to see when the tax payment would hit the account.

By April 25, when the money was still not debited from their account, the taxpayers emailed their longtime CPA tax return preparer, who told them to wait until April 30, and if the money were still in their checking account at that date he would follow up with the IRS.

On April 29 the now concerned taxpayers emailed their CPA again saying that the money was still in their account. The preparer checked his records and ealized that that he failed to e-file the extension and had not given instructions to IRS to debit the payment.

As a threshold matter, why didn’t the taxpayers avoid having to file a suit just request administrative relief under the IRS’s First Time Abatement policy? To add insult to injury the Oosterwijks were not eligible, because their decades long history of tax compliance was tainted by a $7 late payment penalty from the 2014 tax year and the first time abatement for delinquency penalties requires a clean past three years of tax compliance.

With that out of the way the opinion first addressed a variance issue because the formal refund claim addressed reasonable cause relating to the mistaken belief that the extension was filed and did not mention the advice the CPA gave about limiting penalty accrual by filing a 4868 after the due date of the return. The opinion concluded that the claim and communications with IRS were sufficient to put IRS on notice about the full extent of the reasonable cause argument. (as an aside the opinion also seems to mix up the SOL issues in 6511 and 6532).

That gets to the merits of the reasonable cause defense. The taxpayers argued that the FTF penalties should be completely excused because they had reasonable cause for filing late, specifically that their accountant failed to e-file their extension request and their personal e-filing access was limited.

The Oosterwijk opinion cites to the opinion in Boyle, and also to Justice Brennan’s concurring opinion, where he “stressed that the ‘ordinary business care and prudence’ standard applies only to the “ordinary person.” That is, the standard exempts individuals with disabilities or infirmities that render them physically or mentally incapable of knowing, remembering, and complying with a filing deadline.”

The Oosterwijks argued that “Boyle does not apply to electronic filing, because a taxpayer cannot personally confirm that an accountant has e-filed as promised.”

The Oosterwijks essentially argued that the placement of a third party (the preparer) “between the taxpayer and the IRS, and the Oosterwijks’ inability either to e-file on their own or to confirm the e-filing’s transmission put the filing beyond their control according to Justice Brennan’s concurrence.”

The opinion disagreed, noting that the taxpayers were free to paper file an extension (and in fact did so).