The US has moved up the rankings of the Tax Foundation’s 2018 International Tax Competitiveness Index (ITCI), following significant reform implemented by the Tax Cuts and Jobs Act 2017 (TCJA), implemented at the beginning of the year.

Last year’s ITCI saw the US ranked 28th, Whereas this Year’s Report Places it 24th on the List. 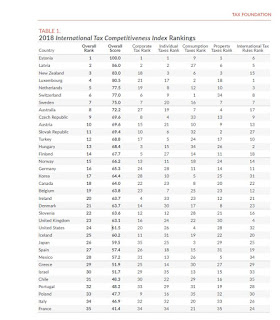 The ITCI measures the relative competitiveness and neutrality of each tax regime in the OECD, and concludes that countries with the lowest marginal tax rates and fewest ‘distortionary’ taxes tend to be those with the most competitive tax systems.

The United States adopted a comprehensive tax reform package that included a reduction of the corporate income tax rate from 35 percent to 21 percent, improvements to expensing of capital investments, and rate changes for the personal income tax. As a result, the U.S. improved its ranking from 28th to 24th.

In the individual rankings, the US was placed 26th for individual taxes and 28th for property taxes, while it came 20th in the corporate tax ranking.

The Tax Foundation described the TCJA as “the most significant tax code overhaul in over three decades,” and said on the release of this year’s ITCI: “Due to reforms made by the Tax Cuts and Jobs Act to lower the corporate income tax rate, improve expensing of capital investments, and adjust personal income tax rates, the US improved four spots.”

Nonetheless, the Foundation pointed to areas which would improve the US’ performance in the ITCI, calling both its income tax and property tax burden “weaknesses”, and describing the international tax system as “onerous.”

Estonia has topped the Index for the fifth successive year, while France came at the bottom of the 2018 ranking.

Want To Invest in the US? 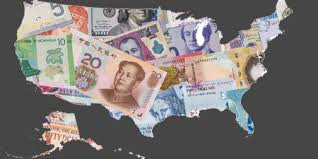