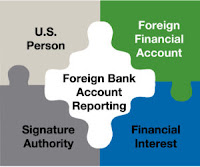 On May 22, 2018 we posted  A Taxpayer Victory on a FBAR Penalty Case - FBAR Limited to $100M! where we discussed that the IRS had sued a Texas man to collect hundreds of thousands of dollars in unpaid civil penalties, plus interest, for the taxpayer’s allegedly willful failure to report offshore accounts on Foreign Bank and Financial Accounts forms for 2007 through 2010. The Texas federal judge ruled that the Internal Revenue Service went beyond the cap on civil penalties it can assess for undisclosed offshore bank accounts,  rejecting the agency’s argument that regulations limiting the amount are implicitly invalid.
Even Though a Regulation from 1987 Limits the Penalty Cap for Willful Nondisclosure at $100,000, the Agency Had Argued That Congress Made Changes to the Law in 2004 That Gave the IRS the Authority to Exceed That Amount.

Now a according to Reuters a second district court has determined that, despite a statutory change authorizing higher penalties, IRS couldn't impose penalties, for willfully failing to file a Report of Foreign Bank and Foreign Accounts (FBAR), in excess of the amounts provided in regs that were promulgated before the law change and that haven't been changed to reflect the increase.

The court said that both the pre-2004 version and the current version of 31 U.S.C. 5321 specifically grant the Secretary discretion to assess penalties. Both versions state that the Secretary “may assess” the described penalties. The statutory language is clear, and there is nothing in the legislative history offered by IRS that suggests that Congress intended to limit the discretion of the Secretary to determine what penalties should be imposed.

The court went on to say that, even assuming that such legislative history is relevant, it does not support IRS's argument. The Senate Report discusses threats arising from offshore accounts in the context of adding civil penalties for non-willful violations, but there is no discussion about willful violations. Willful violations are mentioned only in the Conference Report, which states only that the increase in penalties is based on a Senate amendment and that the committee accepted the amendment. See H.R. Rep. No. 108-755 at 615 (2004) (Conf. Rep.). Although Congress favored higher penalties for FBAR noncompliance, there is nothing here that suggests that Congress believed that the maximum penalties for willful violations should be mandatorily imposed.
In conclusion, the court said that "although IRS believes that it is empowered by 31 U.S.C. 5321 to act, it is not. It is empowered by the Secretary who has discretion to determine what penalties are imposed. 1010.820 remains in effect until amended or repealed."
Have Undeclared Income from an Offshore Account?

Want to Know Make Sure You Are Not Over Penalized
If You Do Not Enter The OVDP Program?