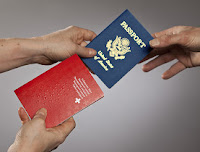 Americans renouncing U.S. citizenship increased 6X in the second quarter from a year earlier as the government prepares to introduce tougher asset-disclosure rules.

Expatriates giving up their nationality at U.S. embassies climbed to 1,131 in the three months through June from 189 in the year-earlier period, according to Federal Registerfigures published today.
That brought the first-half total to 1,810
compared with 235 for the whole of 2008.
The U.S. is the only nation in the OECD that taxes its citizens wherever they reside.
Shunned by Swiss and German banks and facing tougher asset-disclosure rules under the Foreign Account Tax Compliance Act, more of the estimated 6,000,000 Americans living overseas are weighing the cost of holding a U.S. passport.
Factors causing U.S. Citizens to renounce:
1.      Since 2011, Americans, who disclose their non-U.S. bank accounts to the IRS, must file the more expansive 8938 form that asks for all foreign financial assets, including insurance contracts, loans and shareholdings in non-U.S. companies as well as the traditional FBAR Form TD 90.22.1.
2.      Failure to file the 8938 form can result in a fine of as much as $50,000.
3.      Clients can also be penalized 50% of the amount in an undeclared foreign bank account under the Banks Secrecy Act of 1970 for failure to file and report their account(s) on the FBAR form.
4.      It is estimated that the additional compliance costs for companies that employ Americans abroad and want to ensure that they are filing the correct U.S. tax returns and asset-declaration forms are at least $5,000 per person annually.
5.      The resulting increased U.S. accounting costs alone are around $2,000 per year for a U.S. citizen residing abroad. and
6.      They are shunned by Foreign Banks and cannot open nor maintain their accounts with foreign banks that are facing tougher reporting rule under FATCA.
Need Advice On "Should I Stay or Should I Go"?