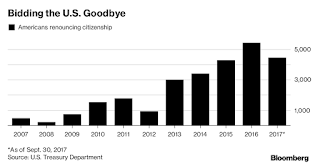 Americans are on pace to renounce their citizenship in record numbers in 2017, according to the latest quarterly report from the Treasury Department.

Under federal law, Americans are taxed according to their nationality, which causes U.S. citizens living outside the country to face taxation from both the U.S. and their nation of residence. The pace of Americans jumping ship started to accelerate in 2010, when the Foreign Account Tax Compliance Act (Fatca) became law. The act was intended to stem tax evasion of U.S. citizens living or working abroad by basically requiring foreign institutions holding assets for American expats to report those accounts or withhold a 30 percent tax on them.

The graph to the left is based solely on IRS data and shows the number of published expatriates per year since 1998.
The connection between the list of expatriates and the IRS implies a link to tax policy.
The U.S. is one of a very small number of countries that tax based on nationality, not residency, leaving Americans living abroad to face double taxation.
The escalation of offshore penalties over the last 20 years is likely contributing to the increased incidence of expatriation.
Should I Stay or Should I Go?
Need Advise on Expatriation ...
Contact the Tax Lawyers of
Marini & Associates, P.A.