Greek Co. Not Liable For $4M Gain From Sale of US Partnership Interest

Greek Co. Not Liable For $4M Gain From Sale of US Partnership Interest

The Tax Court has concluded that a foreign corporation's proceeds from the redemption of a U.S. limited liability company that was treated as a partnership for U.S. income tax purposes was not U.S.-source income and was not effectively connected with a U.S. trade or business.

Grecian Magnesite Mining, Industrial & Shipping Co. SA had already conceded that it was liable to the IRS for $2.2 million of the $6.2 million it made on the redemption of its 12.6 percent stake in Pennsylvania-based magnesite mining company Premier Magnesia LLC. That left Tax Court Judge David Gustafson to deal only with the remaining $4 million, which he said cannot be treated as piecemeal sales of Premier’s assets but must be addressed wholesale.

The IRS can’t treat the $10.6 million buyout as an “aggregation” where GMM’s gain would be attributable to a sale of its interest in Premier’s physical assets and would thus be liable to the IRS, Judge Gustafson said, in part, because payments of this type must be treated as partnership distributions and those distributions went to a company outside the country.

The reason GMM is liable for the $2.2 million chunk, according to the ruling, is precisely because that money, spread between 2008 and 2009, was tied to Premier’s physical assets in the U.S.

As for the rest of the money however, Judge Gustafson held that the IRS can’t attribute it to GMM’s U.S. office, meaning Premier’s office since the Greek company has no other U.S. presence, instead of properly treating it as foreign income. The “U.S. office rule” would only work, according to the 55-page ruling, if the income in question, from the redemption, could be traced to Premier’s office.

“We conclude that, for the partnership’s U.S. office to be a ‘material factor’ in the relevant sense, that office must be material to the redemption transaction itself and the gain realized therein, rather than simply being a material factor in ongoing, distributive share income from regular business operations,” the judge said. “Consequently, the commissioner’s argument that Premier’s U.S. office would have been a material factor for a hypothetical sale of underlying partnership assets misses the mark.”

Nor can Premier’s own U.S. efforts to increase its value be considered part of the gain GMM realized, according to the ruling, because those investments are separate from the money the Greek company made in the buyout.

Even if Premier’s office was considered a material part of producing the gain GMM realized, Judge Gustafson said he’d still need to find that the money came in the “ordinary course of Premier’s business conducted through its U.S. office” to be attributed there and not in Greece. The judge found that the IRS “again conflates” Premier’s ongoing business activities with the redemption of GMM’s partnership stake, which the ruling held to be “an extraordinary event” not easily tied in with normal business.

“Premier’s business did regularly produce income (and GMM paid tax on its distributive share of that income each year),” Judge Gustafson said. “However, contrary to the commissioner’s assertion, Premier was not engaged in the business of buying or selling interests in itself and did not do so in the ordinary course of its business.” 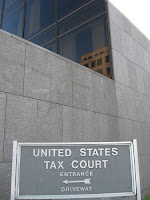 The judge also rejected any penalties in the more than $2.1 million challenged deficiency GMM had been facing from 2008 and 2009 after an IRS audit. While the company should have reported making over $1 million in Foreign Investment in Real Property Tax Act gain in 2008, instead of the zero it put down, and it should have filed a 2009 return but did not, Judge Gustafson held the company properly relied on its American advisors.

An important part of the decision Thursday was in the judge’s refusal to defer to a 1991 IRS revenue ruling holding that gains like the ones here can be effectively tied to U.S. businesses.

“Rev. Rul. 91-32 is not simply an interpretation of the IRS’s own ambiguous regulations, and we find that it lacks the power to persuade. Its treatment of the partnership provisions discussed above in part II.B is cursory in the extreme,” Judge Gustafson said, noting that the ruling doesn’t even cite Section 731 of the Internal Revenue Code, which deals with partnership distributions.

Have A Tax Problem?