We originally posted on March 31, 2014 Caterpillar Saved Billions in US Tax By Shifting Profits to a Swiss Subsidiary where we discussed that Caterpillar Inc., an American manufacturing icon, used a wholly owned Swiss affiliate to shift $8 billion in profits from the United States to Switzerland to take advantage of a special 4 to 6 percent corporate tax rate it negotiated with the Swiss government and defer or avoid paying $2.4 billion in U.S. taxes to date, a new report from Sen. Carl Levin, the chairman of the U.S. Senate Permanent Subcommittee on Investigations shows.

Then we posted on May 7, 2015 Caterpillar Faces Criminal Probe In Addition to IRS Penalties Related to its Offshore Tax Strategy where we discussed that this federal probe into Caterpillar Inc.’s elaborate tax avoidance strategy highlighted in a Senate hearing last year has pivoted in a criminal direction with the global manufacturer of construction and mining equipment acknowledging a grand jury investigation by the U.S. attorney for the Central District of Illinois.

Now US Internal Revenue Service agents have searched the premises of machinery maker Caterpillar in a tax investigation related to its Swiss subsidiary Caterpillar SARL.

American law enforcement officials searched the headquarters of heavy machine manufacturer Caterpillar and two other facilities on Thursday March 2, 2017 as part of a tax investigation linked to the firm’s Swiss subsidiary in Geneva. 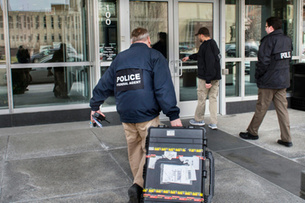 Federal law enforcement agents carry out a search at the headquarters of Caterpillar, in Peoria, Illinois on Thursday, March 2, 2017 (Keystone) ﻿
In a statement issued on Thursday, Caterpillar said it believed the search was part of an Internal Revenue Service (IRS) investigation related to profits earned by a Swiss parts subsidiary, Caterpillar SARL, or CSARL. The firm said it was cooperating with law enforcement.
Caterpillar is contesting an IRS demand to levy taxes and penalties of approximately $2 billion arising from its assignment of profit to the Swiss operation, according to filings with the Securities and Exchange Commission. Caterpillar, in its 2016 annual report, said it is "vigorously contesting" the IRS demand. "We believe that the relevant transactions complied with applicable tax laws and did not violate judicial doctrines," it stated.
PricewaterhouseCoopers, which was paid $55million to devise the plan while also serving as Caterpillar's auditor, declined comment to Reuters.
The apparent escalation of the government's tax dispute with Caterpillar comes as the Trump administration and leaders in Congress have said they want to launch a broad overhaul of the corporate tax code, lowering rates and designing the system to encourage companies to keep jobs and profits within the US.
Have a Tax Problem?
﻿