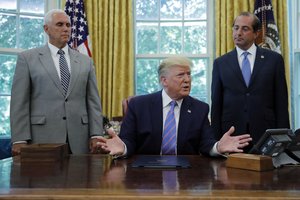 According to Law360, President Donald Trump signed a bill on July 1, 2019 that in part will prevent private debt collectors from pursuing low-income individuals who owe money to the Internal Revenue Service.
Trump signed into law H.R. 3151, the Taxpayer First Act, which will also make a host of administrative changes to the IRS to improve customer service and technology and overhaul the agency's appeals process.

“New protections for low-income taxpayers, practical enforcement reforms, and upgraded assistance for taxpayers and small businesses will all now go into place,” House Ways and Means Committee Chairman Richard Neal, D-Mass., said in a statement after the signing.

The original version of the bill, H.R. 1957, sailed through the House by voice vote in April. But the legislation later hit a snag in the Senate when lawmakers and outside groups expressed concerns that codifying the Free File Alliance would prevent the Internal Revenue Service from developing its own cost-free filing portal.

Eventually, both the House and the Senate passed a version that excluded the free file provision. Both chambers approved the legislation by voice vote, which is a procedure reserved for noncontroversial items.
"I’m Proud That After Three Years Of Thoughtful Bipartisan Work, Our Bold Package Of Reforms To The Internal Revenue Service Are The Law Of The Land," He Said.

According to updated estimates that the Joint Committee on Taxation released last month, the revised bill would raise $36 million over a decade.