A federal district court has held in Dase, (DC AL 9/23/19), that property subject to an IRS lien was jointly owned by a tax debtor and his sister. Therefore, the IRS’s lien only encumbered the tax debtor’s interest in the property.

In 2004, the taxpayer, Scott Dase, entered into a lease-to-own agreement with his parents Walter and Anita to purchase property X, which Walter and Anita owned jointly with a right of survivorship. Under the agreement, Scott was to make monthly payments to his parents until he paid them $63,703, and once Scott paid that amount in full, his parents would convey X to him.
Before Scott made all the payments under the agreement, first Anita and then Walter died intestate while living in Alabama. After their deaths, Scott continued to make the monthly payments required by the agreement but made them directly to the mortgagee. Scott paid off the $63,703 in 2012, and the mortgage in 2018.

In 2017, the IRS obtained a default judgment against Scott for unpaid taxes and filed a lien against X. Then, the IRS filed suit seeking to foreclose the lien and sell the property.

The parties also agreed that Scott had an interest in X, but disagreed on the extent of Scott’s interest. The IRS contended that only Scott had an interest in X because he entered into a lease-to-own agreement with his parents before their deaths and fully performed all the obligations under that contract after their deaths; therefore, under Wadsworth, Scott was the sole equitable owner of X, and no interest in the property passed to Ms. K under the Alabama intestacy statute.
Scott and Ms. K argued that because their parents died intestate before Scott had made all the payments under his lease-to-own agreement with their parents, Scott's only interest in X derived from the Alabama intestacy statute. Therefore, they argued, Scott and Ms. K each owned a one-half interest in X as tenants in common pursuant to that statute.
The district court held that Scott and Ms. K each acquired a one-half interest in X under Alabama’s intestacy statute because Walter still owned the property when he died as Scott had not fully paid the purchase price under the lease to own agreement. Therefore, the IRS's lien only attached to Scott’s one-half interest in X.
Have A Tax Problem? 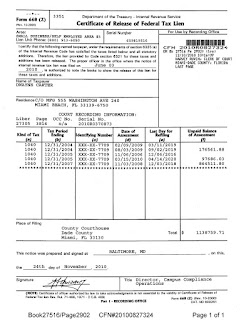