A country (a Contracting State) that enters into a bilateral income tax agreement (a treaty or tax treaty) with another country may modify the results that might otherwise occur under the countries' domestic tax laws. Except in limited circumstances, generally only residents of a Contracting State may claim that the treaty reduces or eliminates the tax that otherwise would be due under a country's domestic law.

Whether an individual is a resident of a Contracting State for treaty purposes is a threshold issue in any case in which an individual is claiming treaty benefits. Article 4(1) (Resident) of the 2006 U.S. Model Income Tax Convention (the 2006 U.S. Model Treaty) defines a resident of a Contracting State as a "person who, under the laws of that State, is liable to tax therein by reason of his domicile, residence, citizenship… or any other criterion of a similar nature." The term "person" includes an individual.

Countries' domestic rules on residency may differ. For example, unlike in the U.S., in many countries an individual will not be treated as a tax resident under domestic law solely because the individual is a citizen of that country. 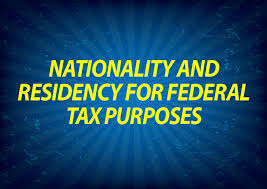 The Practice Unit advises IRS examiners that, after determining that an individual is a resident for U.S. domestic law purposes, they should determine whether the individual is a U.S. resident for treaty purposes based on the text of the treaty before application of the tie-breaker rule (if the resident claims residence in the treaty country). Where an individual is a resident under the domestic laws of both Contracting States, the applicable treaty usually provides tie-breaker rules that apply to assign a single Contracting State of residence for treaty purposes. 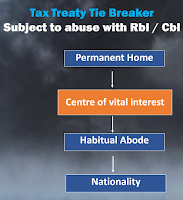 Step 2. Analyze the treaty country residency claim. Determine whether the individual properly claimed to be a resident of a country that has a treaty with the U.S. under such country's domestic law.

Generally, an individual who is a resident under the domestic tax law of a Contracting State is a resident of that Contracting State for purposes of a tax treaty (before application of applicable tie-breaker provisions within the treaty). Information on tax returns and immigration documents may provide evidence of an individual's country of residence for foreign domestic tax law purposes.

Upon request, IRS will provide certification that an individual is a resident of the U.S. for purposes of the U.S. income tax laws. The individual may use this certificate as evidence of U.S. residence to claim income tax treaty benefits in foreign countries (provided that the treaty does not impose additional requirements). 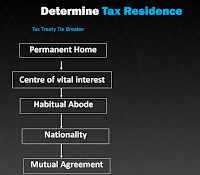 The tests in a treaty's tie-breaker provision are applied in the order in which they are stated and generally determine residence based on:

In every case involving a tax treaty, IRS should carefully review the Residence article (and any other applicable articles) in the treaty, as well as any contemporaneous or subsequent Protocol(s), memoranda of understanding, or exchange(s) of notes between the treaty countries to determine whether an individual meets the treaty definition of a resident.