Your 2011 Tax Return Shows an Amout Due and You Can't Pay?

Your 2011 Tax Return Shows an Amout Due and You Can't Pay?

A woman dressed as the Statue of Liberty waves to attract people to a tax office in Miami April 14, 2008.
Credit: Reuters/Carlos Barria
It's one of the worst tax scenarios: You discover while doing your taxes — or you just know without even doing them —that you owe taxes, and you don't have the cash. What should you do?

You may be tempted to ignore the problem. Don't do it. The worst thing you can do is put off filing your return because you're afraid of the bill. The Internal Revenue Service (IRS) penalties for not filing are more punitive than the ones for not paying. 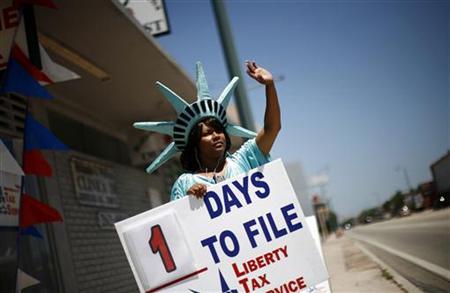 The failure-to-file penalty runs to 5.0 percent a month that your return is late, up to 25 percent, with a minimum penalty of $135. The failure-to-pay penalty is just a fraction of that, at 0.5 percent a month of the unpaid tax at April 17, and even that is cut in half for taxpayers who set up a formal installment plan with the IRS. Either way, you'll also owe interest, currently at a modest 3.0 percent a year.
Consider the case of a taxpayer who owes $2,000 and won't have the money until the end of June. If she files a return or an extension by April 17, the total penalties and interest due would be just $43.

But if she puts off filing until June 30, and pays then, those penalties and interest would multiply to $314. The longer this taxpayer waits to file, the more those fees would balloon.

So the first step to consider if you're not ready to file is the simplest: File for a six-month extension, using Form 4868. As long as you've paid 90 percent of the taxes you owe by April 17, you will not owe the late-payment penalty. You will, however, still owe interest on any unpaid taxes.
If you have the cash, but have run out of time to deal with the paperwork, you can send in an estimated amount to avoid some or all of that interest. Similarly, if you owe taxes, but can't pay all that you owe, you could send in a partial payment to cut the interest and penalties due.

The IRS does offer a few hardship breaks for cash-poor filers. The big one in effect this year is called Fresh Start, and lets those who were unemployed request a six-month extension to pay this year's tax bill without being charged any penalties.

You would qualify if you did not have a job for 30 straight days in 2011 or in 2012 until April 17, or if you were self-employed and saw your income drop by at least 25 percent in 2011 due to the economy. You would file Form 1127, and automatically get until October 15 to pay. While you would get out of the penalties for six months, you would still owe interest.

If you are not in one of these special categories, and you owe more than you have, you may want to weigh your various options for finding the money you need. You could: (1) put your tax bill on your credit card; (2)Use a home-equity line of credit; (3)just pay late and swallow the penalties and interest; or (4)ask the IRS to accept a formal installment agreement.

While the standard advice is to pay the IRS first, that may not make sense this year. IRS rates are so low, compared to credit card rates, that it may make more sense to deal with the tax agency directly. A tax installment payment plan, even with penalties, costs around 6.0 percent a year. At best it is a forced loan from the Government.

Not only is the average rate on credit cards currently 15 percent, according to CreditCard.com, but when you pay taxes on a credit card you also have to pay an added "convenience fee" that could add as much as 2.0 percent to your transaction. That's because the IRS is prohibited from paying the interchange fees most retailers pay on card transactions.

There's no hard-and-fast rule for when to do an installment plan, but the higher the amount the owe and the longer it will take you to pay it, the better off you are to request one rather than simply paying late. An installment plan will put your payments on a monthly schedule and cut your penalty on unpaid taxes in half, to 0.25 percent.

To set one up, you will file Form 9465 and pay an application fee of between $43 and $105, depending on your income level and whether you are willing to pay through automatic deductions from your checking account or paycheck.

The IRS can reject an installment agreement. In fact, acceptance is guaranteed if you owe less than $10,000, request a payment period of three years or less, you have paid all your taxes for the last five years and the "the IRS determines that you cannot pay the tax owed in full when it is due," according to the IRS's rules on installment agreements.

For larger tax liabilities, the process gets more complex, though there is a streamlined application process for those who owe no more than $50,000. Taxpayers who owe larger amounts must file Form 9465-FS.

If it's under $50,000 you are not going to be asked to file a lot of financial information, as previously required for and installment payment plan.

The Tax Lawyers of Marini and Associates, P.A. have helped many taxpayers  obtain installment payment plans to solve their tax liabilities!